skip to main | skip to sidebar

Can you believe we are a month past the longest day of the year? As usual summer is going really fast. We have been very busy working in the shop on a number of different fronts. It’s great to be busy but that always tends to make the summer fly by. 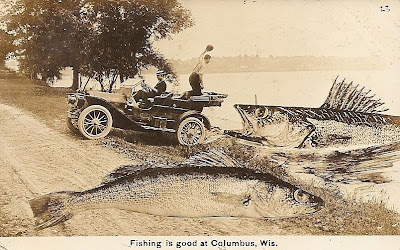 Been finding some cool Columbus postcards lately. This one titled Fishing is Good at Columbus, Wis. is a great image. This photo has to be real. It was long before Photoshop. Some nice walleyes being pulled from the Mighty Craw. I’m guessing it’s been a few years since walleyes of that stature have been landed at the local watering hole. 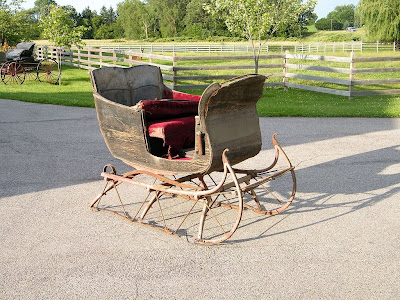 We are well on our way through this project. It is a very attractive Portland Door Cutter that is in need of some serious attention. This sleigh is a Wisconsin family heirloom. I think that is the coolest thing. Family carriages or in this case a sleigh still around to pass through the generations. 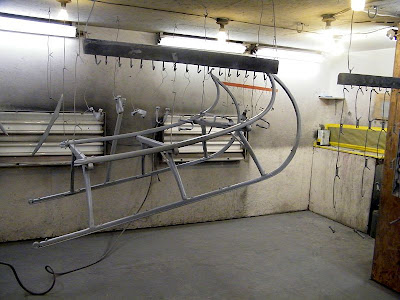 We have really ripped into this sleigh over the month of July. If you look closely in the first photo the runners were completely rotted along the bottom in need of replacement. So everything comes apart, blasted replaced and primed in first coat as we see here. All the metal parts, springs and the whole shebang is hanging in the booth. 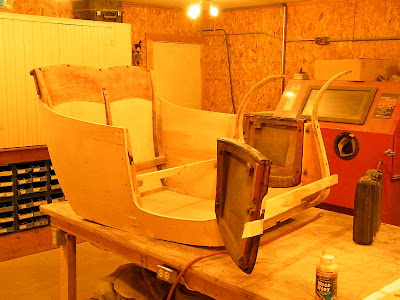 Don't ask me why this picture is yellow. I'm not sure what's up with that but the camera was not digging the lighting. The body was a bit worse for the wear as well. The dash and back panels were split and delaminating. The side panels were cracked and warped. We took the body down to the main frame and started from scratch. The original area for the doors had warped and the doors no longer fit the openings. It was like the body swelled leaving the door openings larger than the doors and way out of whack. We reshaped the side frame pieces and rough cut new sides. 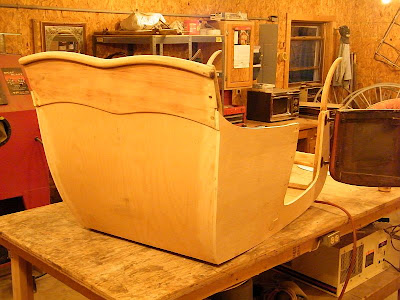 The back panel was split and delaminating so we replaced that as well. That was the starting point. Back panel was installed and the sides were then made to fit. The openings for the doors were rough cut then finish cut after the installation of the doors. 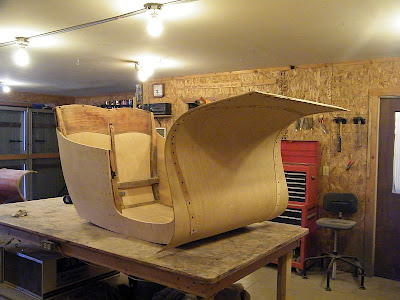 Last but not least came the dash. Today Bob installed a new one. We normally cut the pieces oversized and square as shown here. A rough pattern of the finish dash is drawn on as a guide and then all glued up and fastened. In the morning Bob will remove the screws and cut the dash to the final shape.

I had a friend ask me to blog about the Independence Day carriage accident in Iowa. In case you have not heard there was a runaway horse and carriage in a July 4th parade in Bellview IA. One passenger in the vehicle was thrown from the carriage and died from her injuries. Multiple injuries along the route. This accident made big news. There was actually another fatality in Iowa over the 4th with another parade accident. That one didn’t make so much news. To be honest I’m not sure what I think of it. Horses are never 100% predictable. Sometimes shit happens. Sorry to be so nonchalant about that but it might just be an accident and nothing more. Without being there to witness any of this I would tend to believe that to be the case. Interacting with large animals can be dangerous at times. Most things in life worth enjoying involve a certain amount of risk and I guess sitting watching a parade does too. That being said I do hear from a lot of drivers that refuse to drive parades. When you think about the possibilities of a runaway and picture that happening on a street lined with people it is really scary. Can’t say as I blame them.

Have a great Wednesday! 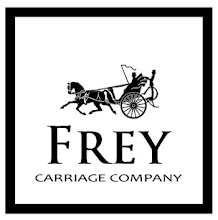 Our historic downtown showroom is filled to the brim with fabulous coaches, carriages and sleighs. Just like what you are seeing here on our site. From cutters to coaches you have landed on the finest selection of horse drawn vehicles in America.

View our website for a complete listing of our current inventory.
http://www.freycarriage.com/ 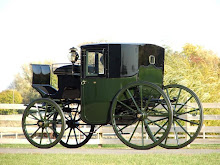